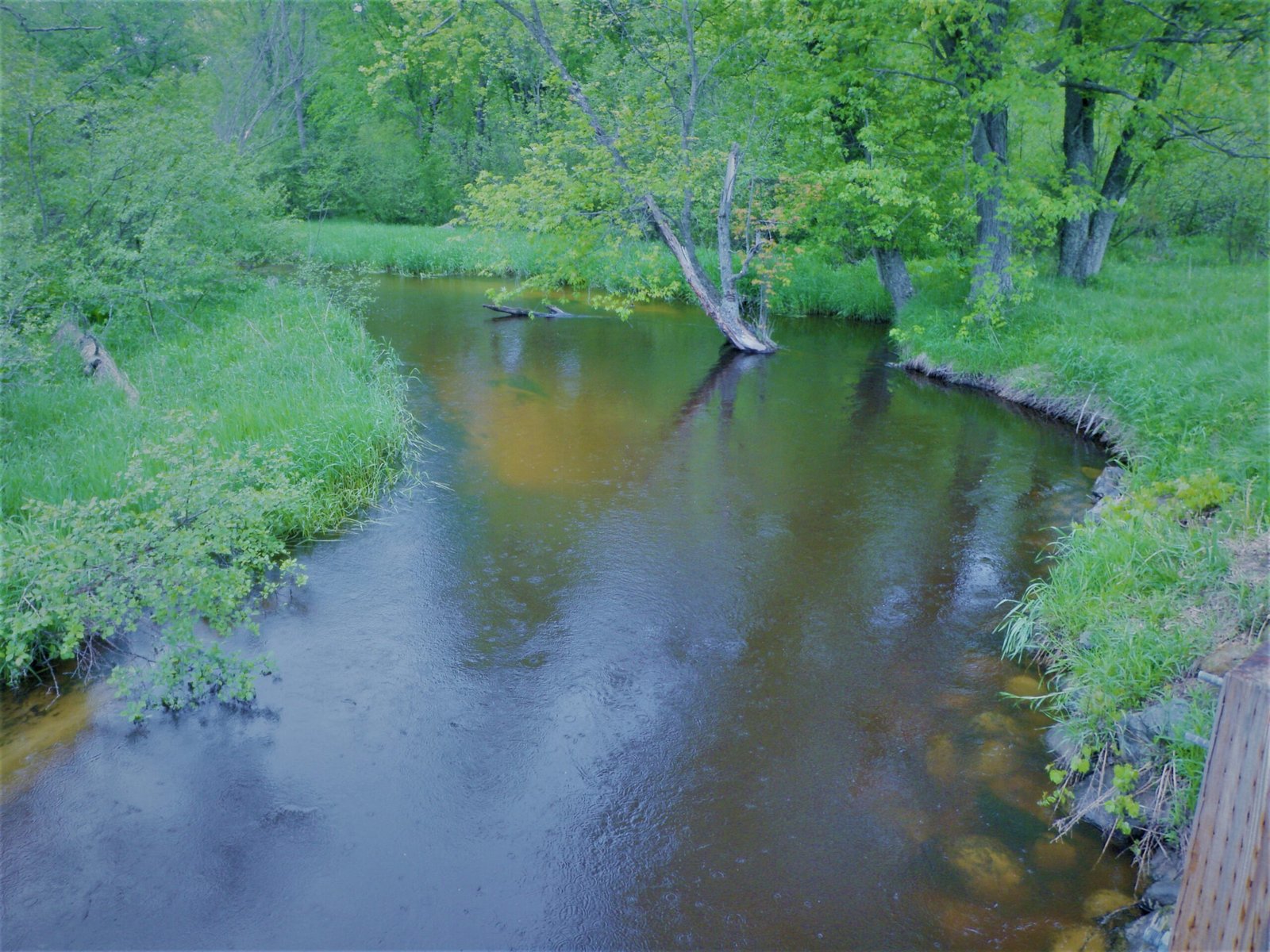 The spring of 2013 was warm and wet. By mid May it was not hot yet but the weather already felt summer like. Traditionally I decided to go after trout. Unfortunately due to heavy rains my beloved Driftless region was out of the question. After heavy rains all of the streams over there were chocolate milk color and overblown. That is why I decided to explore new streams in Central Wisconsin. Rivers over there are different, due to heavy deciduous forest cover and soil consistency they run clear with the brownish tint. That is why they are still fishable even after heavy rains and high water periods. The downside is that they carry far less trout than the Driftless streams. You can forget about a double digit fish count days. However the trout that reside there can grow to impressive sizes and I personally heard some tall tales about truly trophy monster trout from that area. I decided to hit the Tea river, a stream renamed by my friend and veteran trout angler who discovered it’s potential. I start slowly with casts downstream right from the bridge. Usually there is always trout holding over there that chases the lures away but never strikes. This time after a third cast I register a slight tap, followed by a second one, but the kind that almost rips the rod out of my hand. For a few seconds I thought that the legends must be true and I must have hooked one of the monsters that supposedly reside in this stream. Unfortunately turned out to be a decent smallmouth. Although little disappointed I took it as a good omen.

I slowly worked my way upstream, casting to every hole or laydown. The other difference between the Driftless and central Wisconsin streams is the surrounding environment through which they flow. While the former usually flow through open meadows, pastures and farmland, the latter flow mostly through heavy forest. That makes the access difficult on a good day. Later as the summer rolls in, those rivers are pretty much inaccessible due to heavy vegetation and swarms of mosquitos which already began feasting on me. After fishing through another fallen log I score hit on my Panther Martin spinner followed by a tail dance and a jump… and a slack line. This was a nice trout, fat and fast. I quickly measure the rod to the fallen tree branch to get the idea to the size of the fish and see that it was close to 20″ or at least high teens. Motivated I keep on fishing, unfortunately nothing happens for the next 2 hours. Finally I get to the bridge and cast upstream into the deep run with heavy current. Turns out that was the money spot, and I quickly score 4 trout with 2 of them being 17 and 16 inches. They are fast, fat and strong reminding me more of a fresh lake run trout than a inland stream fish.

Since it was already getting dark I thought about calling it quits. However I decided to utilize last hour or so of daylight and try hitting the nearby Wisconsin river or as some of my friends call it, the “Big mama”. I made this decision after I realized that in my trunk I had old 2 piece Shimano Compre musky rod and a few big lures. I took it once with me to try it out after work on one of the lakes in DuPage Co Forest Preserves and I forgot to take it out of my trunk. I did not really expected much, maybe a bass or a pike which I heard were caught from there. When I arrived to the boat launch I noticed 2 other fishermen with heavy gear and throwing big lures. Hmmm, are they fishing for Musky? The infamous “M” fish. The legendary fish of a 10000 casts? Sure looked like it. I strike up a quick conversation and they turn out to be friendly. After sharing a chat and a beer we decided to trade lures. I give away on of my Salmo Slider in exchange for Hellhound in crazy lemonhead color. At first I was not too thrilled about the trade, I usually followed the “match the hatch” rule, and this thing look like a freak from the Halloween techno party. However my newly met fishing buddy sweared that this is his best pick. Upon having closer look I realized that maybe he is not bs’ing me when I noticed the amount of scars on the lure. Surely it must have already seen plenty of teeth in its lifetime. Still unconvinced I finished my beer and went up to the spot near the bank. I snapped on my new clown freak bait and made a short cast careful not to hang it up on the tree branches. Lure fell inches away from the brush with a large “plop”. What happened next is history. Water almost immediately exploded like from the grenade and I sensed another “nibble” that almost ripped me out of my waders. The fight lasted maybe 2 minutes. Once the fish calmed down enough I pulled it away from the brush without reeling but just backing away until somebody netted it for me.

Turned out that the culprit was the legend herself, the mythical “M” fish of 10,000… or wait how about 1 cast. She was a beautiful fat female Musky with a slight gash on her tail, probably a souvenir from the recent spawn. Although she was only 36 inches she looked massive due to her girth. This was also my first legitimately caught Musky. I caught 2 others before. One was a accidental snag when I was casting for bass on lake Shelbyville in IL. The other one was 34 incher I got from trolling on a guided trip on Madison Chain. This one was the first legit fish from the cast, and the one that sparked my ongoing affair with the Musky species that lasts till this day.